Bring creative play to each day 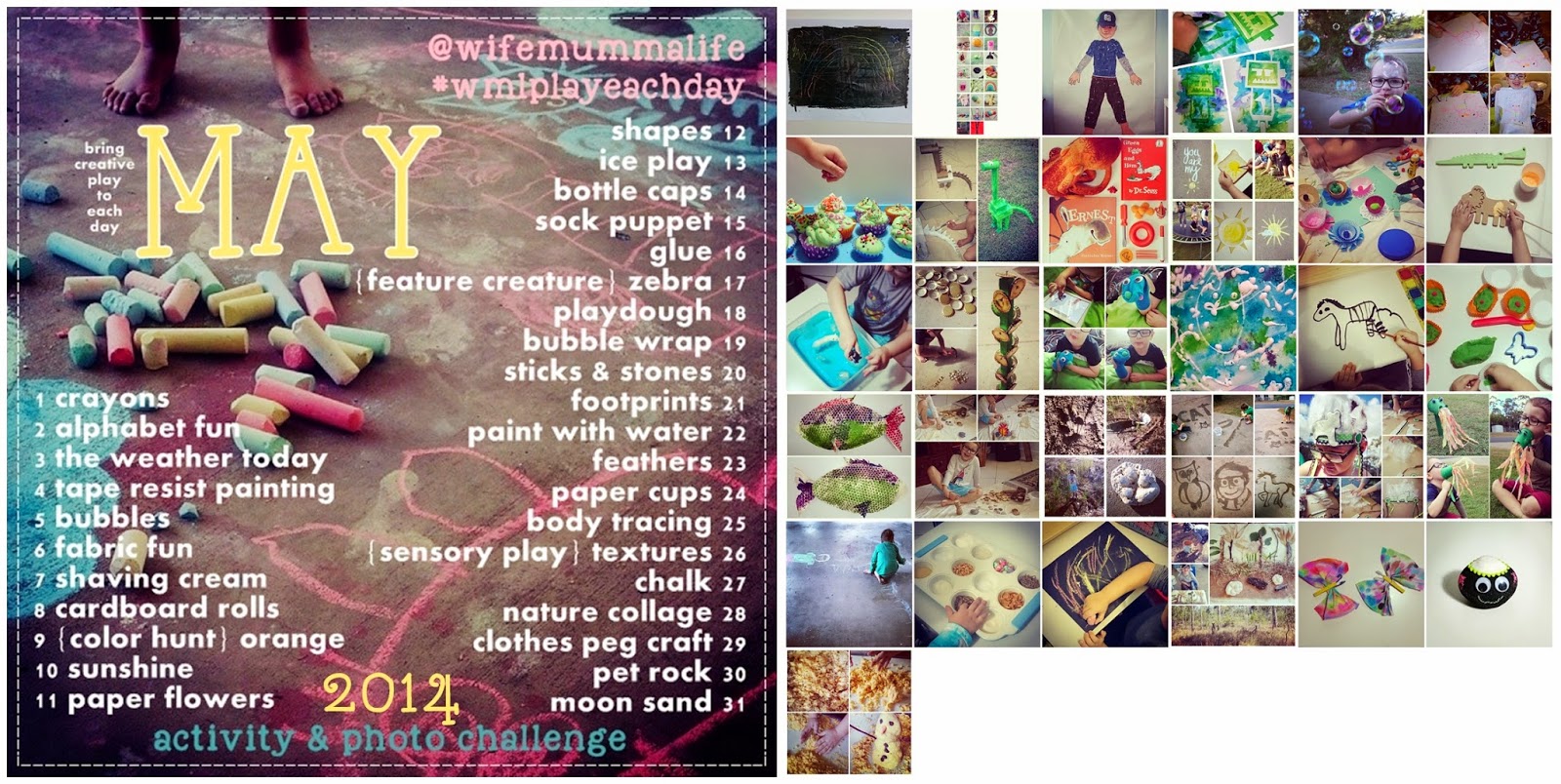 1. Crayons - the good old black crayon scratch drawings from Primary School days. Last time I did this was just a few years ago with a prep class, and they loved it, so I knew my boy would enjoy discovering the rainbow colors as he scratched the black away...and he did!
2. Alphabet fun - we searched high and low for items to represent each letter of the alphabet, as we recited it over and over. Although he knows the letters, he can't read, so I sounded out each letter and gave him options to choose from.
3. The weather today - Dressing to suit the weather was our take on today's prompt. It's sunny but cool and breezy today. Not quite jumper weather, but long sleeves for sure. So, we traced around my son's body and we then glued fabric to our new little friend to dress him to suit the weather today. It was a big project but he mostly stayed interested.
4. Tape resist painting - we've done this activity a few times before but with much more simple tape designs, so I decided to put a little more effort into this one. He was excited when he saw it was a robot...and even more excited as we removed the tape to reveal the end product.
5. Bubbles - We played with bubbles as he had an early dinner picnic on the driveway after Kindy. (Mumma made soup, but accidentally added too much hot pepper for him too eat it.....so, he got hot chips!)
6. Fabric fun - I purchased some fabric pens and we've been itching to use them. On the way to Kindy I reminded him to have a think today about what he wanted to draw on his t-shirt. On the way home from Kindy he told me he wanted draw a picture of me, daddy and himself at the beach....but once he started it turned into a snowman....Olaf, of course!! ....and some rainbow snow.
7. Shaving cream - Last night while I was trying to sleep I was thinking about today's activity and 'cupcakes' popped into my head. I knew my boy would love my idea! He sees his Mumma making real cupcakes all the time. I colored half the shaving cream green (for frosting) and left the other half white (for batter) and popped them into piping bags. I then got a cupcake tray out and put a variety of sprinkles in it for him to use to decorate...and on a tray I set out a collection of cupcake cups. He then filled the cups with the 'batter' and then 'frosted' the cupcakes. Next came the most exciting part to him, eating the sprinkles....I mean decorating with the sprinkles!!! He was however, a little disappointed he couldn't eat the resulting shaving cream cupcakes! At bath time he's going to smash them in the tub, just for fun!!!
8. Cardboard rolls - I asked him what he wanted to make and he decided on a dinosaur. Green, of course!! I used the hot glue gun and he told me what to glue where. We painted it all white and then green, then added the eyes. He did an amazing job with the painting, was very careful and patient. He loves his new dino, and took it with him to Kindy for Show and Share.
9. {Color Hunt} Orange - Collecting all things orange, always a fun activity in this house!
10. Sunshine - we sang the song "You are my sunshine, my only sunshine. You make me happy when skies are grey..." He painted a sun on his bread with a milk and food coloring mix, before we toasted it and he ate it. He played in the sunshine at a friend's birthday party, and made a paper plate sun as we talked about all the things we need sunshine for.
11. Paper flowers - we sat on the floor and created the paper flowers as we sing along to the songs from Frozen.
12. Shapes - he had a fun time painting these wooden animal shapes. I love these!
13. Ice play - although the ice melted way too fast on this occasion, we tried to balance the penguin on the it. We tried big bits of ice and little bits of ice, but they were all too unstable. He had fun trying though. But then, apparently, the polar bear ate the poor penguin. Sorry penguin.
14. Bottle caps - yesterday's activity finally completed today. A rattle stick!...well, that's what we're calling it! I did the tricky bits, but he flattened the bottle caps. Boy + hammer.....what could go wrong???!!! Fortunately, nothing! He actually did very well.
15. Sock Puppet. he wanted to make a puppy so along the way i asked if he wanted short ears or long ears and what color etc, until we got the finished product, this cute little fella.

16. Glue - watercolors + glue + salt. The photo was taken before the glue dried clear. He enjoyed the painting as always but adding the glue and salt added something different to experiment with. To be honest this didn't work quite as i imagined, however it was still fun to do.


17. {feature creature} zebra - I did the basic outline of the zebra and my clever little boy added the stripes. Turned out pretty cute if you asked me?! We also watched a movie about a zebra.
18. Playdough - he made some playdough cupcakes, "See the red cherry Mummy?" he always loves a playdough activity.
19. Bubble wrap - we created the patterned paper by rolling paint onto the bubble wrap and pressing it onto the paper, then we realised the pattern resembled fish scales so we made a fish with the paper! We filled the fish with stuffing to puff it out and stapled around the edges, then added the tail and fins with more of the paper.
20. Sticks and Stones - some free play with sticks and stones. It was great to leave him be and let his imagination run free. He built towers and knocked them down, set up a campfire with felt fire and felt sticks and stones and listened to the sounds different rocks made as they clashed together.
21. Footprints - although technically pawprints, we went searching in the bushland for wild animal tracks. We found kangaroo tracks, a variety of dog prints and bird prints, however none were very clear so we ended up casting a fresh print that our dog Shiloh left.
22. Paint with water - he was not well today and not much into this activity, I sat with him and encouraged him, but it didn't really help, so I painted a little as he circled me on his scooter and watched.
23. Feathers - it was a big ask with him still not 100% well, but I thought it would be fun to make a headdress. I made the band and he picked out the little bear for the front, glued the side decorations down and then sorted through the feathers and stuck them on. It took a lot of encouragement and patience, but we got it done! He looks so adorable in it!
24. Paper cups - we made a fire breathing dragon!!! paper cup with the bottom of it cut our and thin strips of crepe paper attached. a couple of eyes, some nostrils and a handle to hold it by as he blows the fire through it.

25. Body tracing - we didn't spend as much time on this activity as I had planned, but he still enjoyed himself. he decided on a pose for me to trace around and then traced around his Daddy who joined us for this activity.
26. {Sensory Play} Textures - I filled a cupcake pan with different textured edibles, flour, rice, popcorn, bran, sugar, corn, rock salt, cornflakes, couscous, coconut, lsa, semolina and got my little boy to feel each one and describe the feeling to me...and tasting and/or eating everything!!
27. Chalk - we decided to do some indoor chalk drawing on colored paper today. I encouraged him to draw a picture but he decided that random lines where his thing today. What can you do?!
28. Nature Collage - we went for a walk in the bushland behind our house to collect sticks, bark, dirt and leaves for our picture. He decided where everything went in the collage and I helped out with the glue. He then added the plaster cast dog and cat paw prints.
29. Clothes peg craft - we made beautiful butterflies with clothes peg bodies. This was so simple and the end result is just gorgeous!! The wings are a single sheet each of paper towel/kitchen roll and the antennae are small pipe cleaners. I pre-dampened the paper towel and using wet watercolor paint or you could use food coloring, he dotted and swiped the paint all over the paper. We then used a hairdryer to speed up the drying process, (we were too impatient to wait for it to dry naturally) we folded the paper like you would a paper fan and pegged the body on also pegging the curled antennae. A simple spreading of the wings and your done! He's been flying them around the house since....and landing them on my nose as I've been trying to type this!! Hehe
30. Pet rock - it's amazing how a bit of glue, googly eyes, a shell hat and a chalk smile can transform a rock into a new pet! I love that he chose to chalk the smile, we can use this pet rock to talk about emotions and change the expression to suit!
31. Moon sand - I discovered this morning that the little bag of sand I had stashed away was gone...probably emptied into the sandpit months ago...and since spread throughout the backyard by the child who for some reason cannot keep sand in a sandpit! (it's not just mine that does that, right?? Hehe.)
So, I had to come up with a new plan, fast!!! Semolina? Sure, why not? I used the recipe below (at half amounts) with some small changes....

I had to add an extra 1/4 cup of water as the Semolina soaked up some water, where sand wouldn't do that.
It worked!!!!!! And would be a great mix for babies as it's entirely safe WITHOUT THE GLITTER OR PAINT!!!
My son loved it, played in it for quite a while, making Olafs, and melting (smashing) them over and over.

Posted by juanita at 4:24 AM No comments: 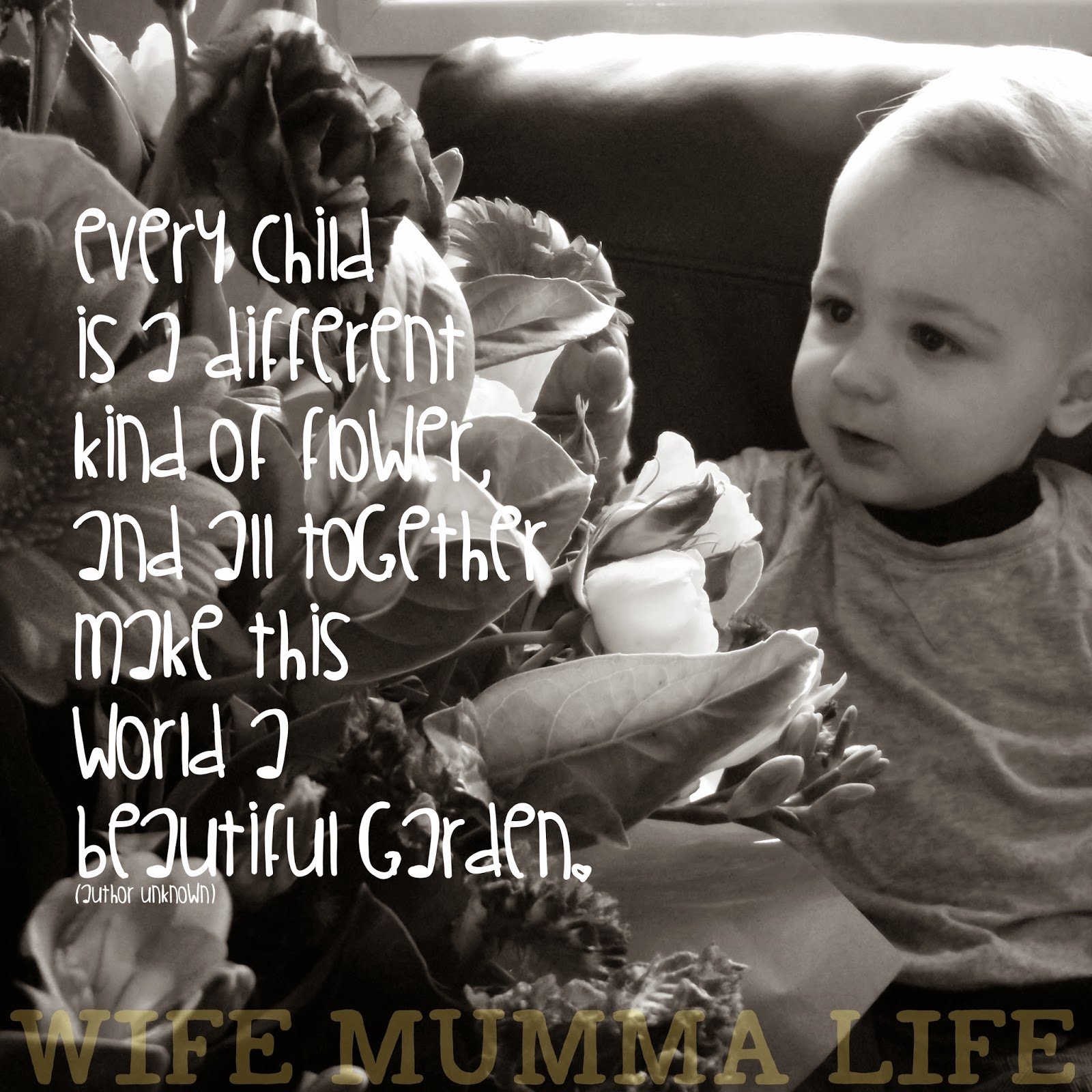 I've made the first of what I hope to be many little picture quotes.
I love to add uplifting and encouraging quotes (my own words and the words of others) to my facebook page because lets face it who doesn't need a little sunshine
every now and then?

Posted by juanita at 6:46 AM No comments:

Bring creative play to each day. 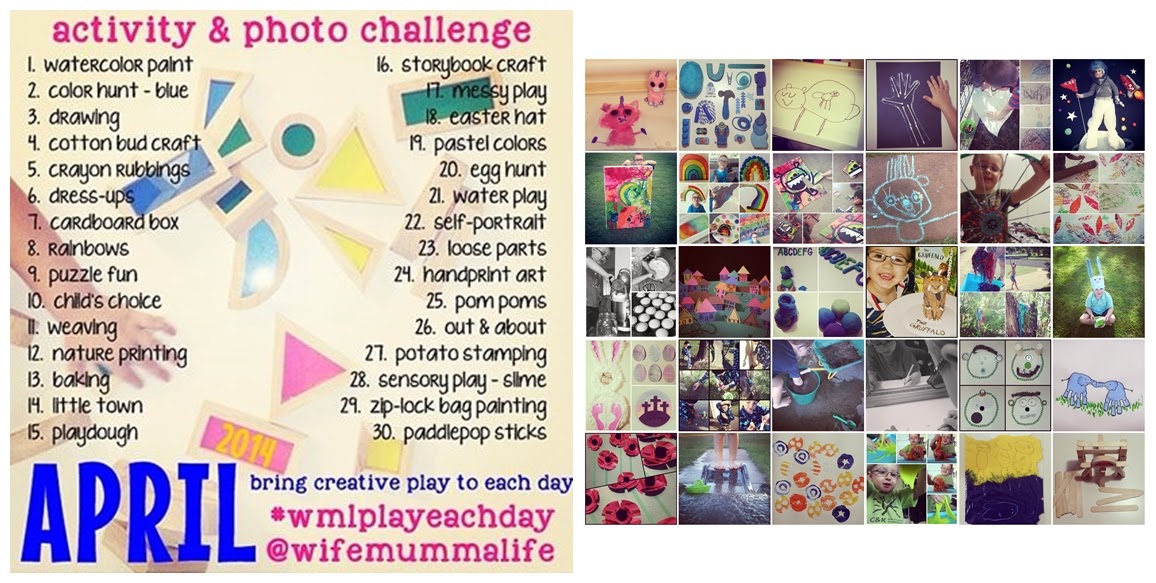 1. watercolor paint I asked him what he wanted to paint and he suggested his unicorn. So, I sat it next to his paper and talked him through the different parts of the unicorn as he painted. He did such a great job. It's so cute!!!


Play along on Instagram @wifemummalife
#wmlplayeachday
Posted by juanita at 6:19 AM No comments: